On Watching Myself Being Interviewed as a Road Scholar 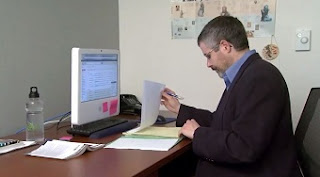 Disappointed is a word that comes to mind. Or, more colloquially, meh.
I found out that Monday March 18 was the air date at about 1:00 in the afternoon, after I came home from teaching. I shared the information with family, friends, and colleagues via social media and text messaging. At first, there was a little confusion about what time PBS NewsHour airs in particular markets and time zones: 6:00? 7:00? What about times outside the east? Luckily, between live broadcast, DVR, live streaming, and YouTube, almost everyone I know has seen the piece. 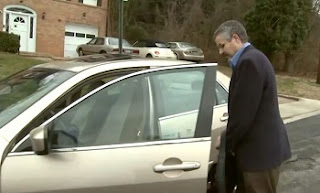 Even before it first aired around 6:30 in the east, I knew the story about faculty retirement and contingents was going to miss the mark: the teaser at the beginning of the broadcast featured an older professor, and News Hour's initial framing took the "graying professors clogging the tenure pipeline" approach. I watched it with my wonderfully supportive wife, and we had similarly ambivalent reactions, sort of a You sounded great but they missed a lot of what you said response.


Overall, this feels like a pyrrhic victory: I'm grateful for the chance to call attention to universities' hiring practices and adjunctification–exploitation duo, yet I'm more than a little disappointed that the story I'd wanted to help tell was, at best, between the lines. Early and often, I preached against the Old Professors vs. Young Professors dynamic; it was one of the first things I said for the record during the initial phone interview. I preached for the idea that the real story is how universities have changed their hiring models to overuse non-tenured/tenure-track faculty, while helping the rich get richer, as it were. I'd hoped that they'd share the information I gave about the million-plus contingent faculty members of various kinds across the country, among other material that wasn't included. The number promises to go up before it goes down.

I didn't (and still don't) bear any ill will toward aged 60+ professors who still are engaged teacher-scholars. There's a much bigger picture here that was out of focus in the story—for instance that some productive and engaged older faculty are allowed to be so through the kinds of university research/travel funding that contingents lack, and that few of them split their time and intellectual energy between multiple campuses.

It's also been nice—for now, anyway—to engage in the lively discussion about the story and related issues on PBS's site. My initial comment clarifying what I said in the interview about the contingent situation and lack of formal university support for research and travel keeps getting voted to the top—always a nice thing to see. I've done my best to clarify and expand when necessary, such as about how my pay rate is higher, comparatively speaking (something else I mentioned during the interview). Luckily, News Hour's commentariat are largely focused and diplomatic, which helps keep the discussion constructive. 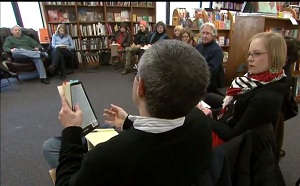 As I mentioned in my first set of reflections on the PBS experience, the producer was always classy and professional, which gave me high hopes for the story. I was expecting something more than an ambivalent reaction to the finished piece. I tend to be an optimist, so now I'm hoping this somewhat disappointing story sparks more conversation, action, and change to university's hiring practices. As of now, I'm also hoping the producer accepts my request for a follow-up. If she does, wonderful. If not, we'll have to take more control over the public narrative. NewsHour's choice to follow up is in their hands; our choice to move forward is ours.

Post Script: According to both Paul Solman and the producer, they intend to do a more focused story on contingents, adjuncts, road scholars, and whatever other moniker applies. If you are interested, please email NewsHour: businessdesk@newshour.org

Posted by Vanessa Vaile at 1:06 PM