3 ways to get on the solidarity bus & darker October thoughts 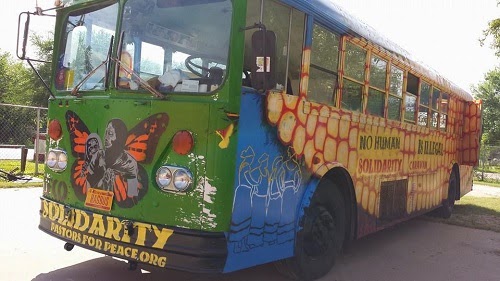 …about the bus part…I've been following, Facebooking and tweeting +Ana Maria Fores Tamayo's campaign supporting immigrant issues and calling the marginalized—social and geographical outliers—to stand together. Her campaign is both online at Adjunct Justice and @AnaMFores and on the ground at protests and all the way to border detention centers. Of the many powerful and moving pictures she has taken documenting protests (sometimes carrying a sign bigger than she is) and trips to the border, I am particularly take the solidarity bus. Maybe because it's public art on wheels or I'm having a 60's flashback, but the solidarity bus sure looks good for my next Precarious Faculty cover image. Besides, Vanessa is butterfly in Greek.

That's one way to get on the solidarity bus. The other two are National Adjunct Walkout Day and Meg Feeley's Adjunct Student Loan Debt / PSLF Fairness Campaign

The PSLF Fairness campaign doesn't really have a name yet but no doubt will. This will do until then. Meg did great handout for the recent PSC-CUNY Rally that we'll be sharing along with a longer, separate post here. Get your Walkout Day (hashtag #NAWD) updates on Facebook at the link above, on Twitter @NationalAdjunct and here at Precarious Faculty (Tumblr). The NAWD planning forum will open very (maybe today), Adjunct World Comics already has walkout tees in production (PS anyone can still come up with their own) and I've been collecting links and tweets for a Storify in the works. We've been busy out on the front lines. Come get on the bus with us. Try all three ways. Come with your own too. Those 'other' October thoughts (and what they might have to do with the academic workplace) are less about the hopefulness of great efforts in the face of adversity and external obstacles than the dark side within ourselves, our daily lives, our own circles and social interactions.

October is both National Bullying Prevention/Awareness Month and Domestic Violence Awareness Month. Perhaps a coincidence, but this October is also the month that #Gamergate emerged onto the onto the academic event horizon, at least the ed-tech and popular culture studies corners of it. Gamergate is, among other things, about extreme social media mobbing and misogyny. Neither is unknown in the academic workplace or its online watering holes. This dark side of being connected even made it into Connected Courses digital utopia ~ as reminder and topic, not a practice. Audrey Watters covers it well in Hack Education Weekly News, "Yes, #Gamergate is an Ed-Tech Issue." Stephen Downes and Alan Levine add more from related perspectives. There's more too, much more.

That's a lot of connecting in one short piece...it will take a lot of unpacking too.
Posted by Vanessa Vaile at 6:05 AM