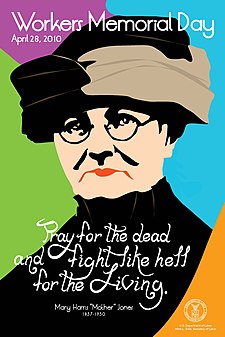 …who do #adjuncts remember on International Worker Memorial Day? That day is today and takes place annually around the world on April 28, an international day of remembrance and action for workers killed, disabled, injured or made unwell by their work." Workers' Memorial Day events are held throughout the world.


That reminded me of the opening of Maria Maisto's recent Take Part Op Ed,

Doug Wright was a highly respected and dearly loved adjunct professor who taught humanities courses for many years at several colleges in Utah. As a so-called part-time faculty member who had the same responsibilities to students as any full-time faculty member, he was given only temporary assignments, sub-professional pay, and was not eligible for health insurance. When he was diagnosed with cancer in May 2009, he spent his life savings on treatment.

Mother Jones' injunction to "pray for the dead and fight like hell for the living" is Worker Memorial Day's slogan. Indeed, an International Worker Memorial Day preceding May Day strikes me as most seemly.
Today, give a thought to those who have died for lack of access to healthcare, worn themselves out before their working through illness because they had responsibilities but neither choice nor care. I include those who have despaired fatally. Although less dramatic and in smaller numbers by incident that plant explosions, fires, building collapses, or mine cave-ins, these lost friends and colleagues are just as much

Each of us remembers at least one. Who do you remember today while making May Day plans? I remember Mary Miner Austen, PhD, friend, mentor, adjunct, folklorist, inspire developmental writing instructor, UL Lafayette, breast cancer, 1996. You think dss writing is a challenge? Try it on chemo.
Posted by Vanessa Vaile at 8:21 PM No comments: Links to this post

after Earth Day comes May Day

…both exercises in calling out unsustainable practices and their consequences…Beltane and Maypoles aside, May Day is more about workplace rights than greenery.


On May 1, 1886, more than 300,000 workers in 13,000 businesses across the United States walked off their jobs in the first May Day celebration in history. In Chicago, the epicenter for the 8-hour day agitators, 40,000 went out on strike...The UK protest actually took place on a Sunday, and in London alone attracted 300,000 protesters to Hyde Park.

For more than a century, May Day has been a celebration of the international labor movement and is a national holiday in more than 80 countries. For obvious reason, it is a popular date for rallies, marches and protests. Last year, Occupy was the dominant theme: this year, seemingly less so. Observances are still planned for Chicago, New York and major cities around the world…and on campuses too.

Read more »
Posted by Vanessa Vaile at 2:43 AM 2 comments: Links to this post

Learn How to #Occupy

…your workplace, community…so why not your campus, classroom & coffeehouse while you are at it? The backlog on organizing, conferences, symposia, strategies, actions, petitions, campaigns, leaving academia, saving academia, ed tech innovation/disruption, change, social media, building online networks of resistance, links, COCAL Updates and all that adjunctiverse/WhitherU stuff  keeps growing. I may not get to it all. You may have it already. Information and links still need to be accessible online. I wonder how best to start and where to curate. Input please. Really.
In the meantime (and because I am really behind on blogging ~ more from surfeit than deficit), this from InterOccupy caught my eye when it landed in my morning mailbox. The NYC General Assembly is offering an"occupy workplace training workshop" (+ Facebook page) this coming Saturday. Going is out of the question, but the idea is interesting. worth following and learning more about. Surely someone following us here on the blog, Facebook page, Twitter or in our new Google Plus Community will (or could) be there. Help us follow and we'll report back to everyone else. Consider it a warm up for Mayday...

Posted by Vanessa Vaile at 1:00 PM No comments: Links to this post

the university as we know it?

…briefly annotated articles from diverse sources (e.g. not just higher ed media) on academic news, trends and culture shamelessly reblogged from Book Forum's blog Omnivore (for the omnivorous reader, part of the academic job description, n'est-ce pas?). Neither unfamiliar topics nor adjuncts either today. Never disappointing, other themed collections cover politics, science, history, contemporary culture, philosophy, sundry topics from the Zeitgeist and more.  perhaps a fresh perspective or so. Still, perhaps someone among us should drop Book Forum a thoughtful note about Omnivore's shameless neglect of the academic precariat? I'm game. Are you?

Eric Royal Lybeck (Cambridge): The Ideological Organization of University Systems: A Theoretical Framework. From The American Scholar, how to do what you do? Paula Marantz Cohen on how the life of a professor isn’t what it used to be. Smart, poor kids are applying to the wrong colleges: How an information mismatch is costing America’s best colleges 20,000 low-income students every year. Jordan Weissmann on how Washington could make college tuition free (without spending a penny more on education).
The online university of spam: Andrew Leonard on how a bizarre email from BachelorsDegreeOnline.com exposed the sleazy side of for-profit college recruitment. Does the rise of the “massive open online course” spell the end of the university as we know it? Keith Devlin on MOOCs and the problem with instructional videos. From TNR, will online education dampen the college experience?
the university as we know it? - bookforum.com / omnivore

Posted by Vanessa Vaile at 8:22 AM No comments: Links to this post

… & other #highered denizens of the internet, whoever & wherever you are! Trolls, stay under your bridges. Everyone else: have some news with your morning coffee. Do not feed the trolls. it only encourages them.

BUT this is today's ABSOLUTE top story in the Adjunct/iverse: go Jack! Olympic College nailed by Education Dept. Accuses Accreditor of Neglecting Adjunct's Complaint - Chronicle of Higher Education (behind pay wall so mug someone for zir password)

Read more »
Posted by Vanessa Vaile at 10:59 AM No comments: Links to this post