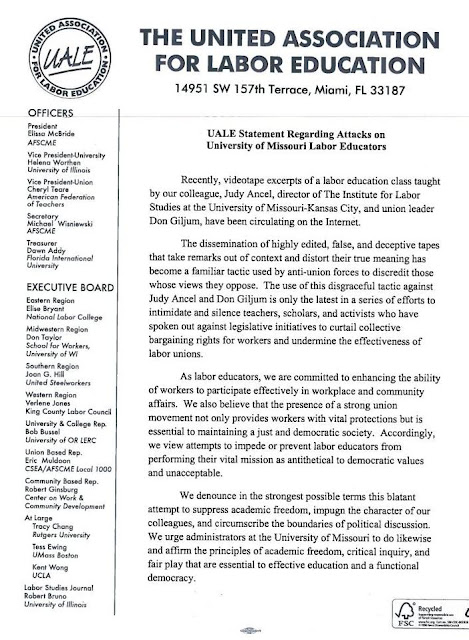 Posted by Vanessa Vaile at 6:39 PM No comments: Links to this post 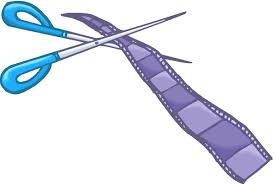 This video slasher job has been and continues to be the topic of lively discussion on highered and labor lists, pushing other topics to the background momentarily. Not to worry ~ we're not forgetting them, just catching this one before the next highered news train wreck. There's an excellent Labor Notes article, "Right-wing Hoaxster Smears Labor Educators," We're working on a letter appealing adjunct Giljum's "not re-hiring." Judy Ancel has issued a statement, already posted to many of these lists as well as blogs such as Gail Francis' Erstwhile Luddite ~ complete with creative editing challenge. No one can compete with academics when it comes to Today, AAUP general secretary Gary Rhoades issued this one.

Washington, D.C. ─ Andrew Breitbart is on the attack again. This time his targets are Judy Ancel, Director of the Institute for Labor Studies at the University of Missouri, Kansas City and her co-instructor in a labor studies class, Don Giljum, an adjunct lecturer at the University of Missouri, Saint Louis. Breibart has produced what purports to be a damning video of the class Ancel and Giljum co-taught. The video, selectively edited from more than thirty hours of classroom footage, has already cost Giljum his job.

The video posted on Breitbart's BigGovernment website is entitled "Thuggery 101: Union Official, Professor Teach How-To College Course in Violent Union Tactics."  The violence that is being done, however, is to the academic freedom and employment security of the instructors, and to the privacy and safe classroom environment of the students, some of whom speak on the video clip.  When students voice their views in class, they should not have to fear that their comments will be spread all over the Internet.  When faculty members rightly explore difficult topics in class, they should not have to fear for their jobs or their lives. (Death threats to the instructors have been posted on Breitbart's blog).

Quality education in a democracy requires the free and open exchange of ideas by professors and students without fear of retaliation.  It requires academic freedom.  And it requires safe classroom environments.  Those commitments and conditions are at the heart of the American Association of University Professors' (AAUP) basic principles.

In his own words, in a recent appearance on the Sean Hannity show, Andrew Breitbart indicated that he intends to "go after" teachers and unions.  That is in keeping with a current environment in which some politicians seek to make a name for themselves by attacking the rights of working people and the work of people whose inherent right (and responsibility) it is to explore a variety of ideas.

Printer-Friendly Page
Posted by Vanessa Vaile at 9:20 PM No comments: Links to this post

Hadley Arkes on Ave Maria University: A challenge among friends. Acts of Faith: Divinity grads aim to compensate for the chaos in contemporary society. Should we arm Christian campuses? David C. Cramer wonders. Faith and the cosmos: Can Catholic universities foster dialogue between religion and science?
Humanities 2.0: New digital tools are bringing new ways to teach humanities courses, even Shakespeare. From THES, a review of Higher Education and the Public Good: Imagining the University by Jon Nixon; a review of The Public Value of the Humanities; and Urania's lessons for Clio: Felipe Fernandez-Armesto on the humanities' need for scientific insights.
Gary Wills reviews All Things Shining: Reading the Western Classics to Find Meaning in a Secular Age by Hubert Dreyfus and Sean Dorrance Kelly. Richard Arum on his and Josipa Roksa’s book Academically Adrift: Limited Learning on College Campuses (and more). A review of The Campaign for an Academic Bill of Rights by David Horowitz. A look at five myths about liberal academia. Speaking untruth on behalf of corporate power: Leo Casey on academics in the service of union-busting.
Tales of the unexpected: There's no such thing as a typical academic, but some have more unusual backgrounds than others. A review of In the Basement of the Ivory Tower by Professor X (and more). Collateral Damage: From John Dewey to the Ivory Tower of Babel in two easy steps. Are women’s colleges outdated? Tom Matlack thought women’s colleges were anachronistic — until he toured Barnard with his daughter.
Why safety schools can be smart choices: Brand-name diplomas don't have much to do with success later in life. Grade point average (GPA) is a historical mistake in two senses, and there is no reason for its continued acceptance.
reading (or re-reading) the university: on college campuses, from Omnivore
Posted by Vanessa Vaile at 4:04 PM No comments: Links to this post

Following the initial DC Summit, more disappointing than not for most adjunct faculty, the first two regional summits slipped by without much notice and even less adjunct presence. The word "adjunct" was rumored to have been uttered at least once. We all hoped for more since we do most community college teaching and know conditions on the ground. Maria Maisto and Tracy Donhardt represented New Faculty Majority at the third Summit, held in Indiana at Ivy Tech. Contingent faculty representation at the fourth and last regional summit this Friday in San Diego seems uncertain. We hope for the best and wish California contingent faculty (the preferred term in their neck of the woods) a good showing and recognition. Get some media out to ask the right questions too.

Tomorrow, April 15, ED will hold its fourth and final Community College Regional Summit at San Diego City College in San Diego, Calif. The focus of this one-day event is on Exemplary Programs for Veterans, Military Members, and Families, and will bring together federal, labor, industry and philanthropic partners to discuss how each entity can support local community college efforts to meet the President's goal of having the best-educated workforce and the highest proportion of college graduates in the world by 2020.

Other topics to be discussed at the summit include solutions and promising practices in college completion, developmental education, industry-education partnerships, services to military service-members and veterans, transitioning adults to community colleges, and successful transfer programs to four year colleges and universities. The Summit will also provide a forum to identify local, state and national recommendations for increasing community college completion in order to meet the President's 2020 goal.

The above ed.gov blog entry was written by Cameron Brenchley, posted on April 14, 2011 at 1:26 pm, filed under College Completion, Community Colleges, Headlines, News and tagged Community Colleges, Graduation, Summit. Bookmark the permalink. Follow any comments here with the RSS feed for this post. Trackbacks are closed, but you can post a comment.

Adjunct Night at the Movies, BYOP

Please take a few minutes to watch the video below about working conditions for adjunct faculty who comprise over 70% of the total teaching staff at the college in question. Appreciate the very "Network moment" courage too of someone, "mad as hell" and "not going to take this anymore!"  Then forward the It is indeed rare among the precariously employed. We're no John Galts, but Peter Finch's Howard Beale (unfortunate outcome not withstanding) suits.

"The gutting of higher education in America has resulted in a corporate model of employment utilizing affiliate college professors who earn less than garbage men and train conductors. This exploitation is reprehensible, immoral and indefensible. This abomination solely serves the interests of college presidents, boards of trustees and administrators at the highest level, while bankrupting teachers, adversely affecting students, tuition payers and ultimately all stakeholders in the educational arena. It must end."

What are your experiences? How do they compare? Are you ready to shout out, "I'm as mad as hell, and I'm not going to take this anymore!" ? If not yet, when...

Posted by Vanessa Vaile at 12:39 PM 6 comments: Links to this post